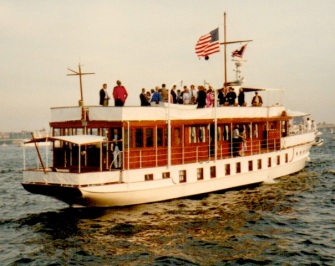 Some stories never get old, such as the one told to me about my Aunt Betty being a Michigan gun moll during the rum running 1920’s when the vast majority of illegal liquor was smuggled into the United States on boats crossing the Detroit River from Canada. As a child, I didn’t know what a gun moll was, and since my ostensible relative was long gone before my birth, she remains somewhat of  a  mystery, similar to Cassandra’s friendship that Elizabeth and I made much later on.
.
The thing is, we didn’t know Cassie was married to a goodfella until after we’d accepted her invitation to be part of the Statue of Liberty Centennial Celebration of vessels gathering in New York Harbor on July 4th, 1986.
.
Granted, we should have suspected it when the wives arrived decked out in their patriotic best for the occasion of a lifetime, while their husbands donned those homogeneous black Robert Hall suits, black Wembley skinny ties, black Hanover oxfords, and black Dobb’s Fedoras contrasted by crisp white shirts and matching white socks for partying under a midsummer sky.
.
But it wasn’t until the custom-made 44’ Cabin Super Cruiser (with it’s master stateroom, two guest bedrooms, three heads, dual galleys, a dining room, and helm reception area) had cast off  from it’s Long Island berth and began racing down the Sound to group-greet the largest assembly of international Tall Ships and an American Armada did his capo status become evident.
.
That’s when Cassie’s husband, Carmine, appeared on a flybridge far above the main deck where we happily clasped our umbrella drinks while lounging in the open console on cushioned deck chairs. We looked up to see a long line of his soldiers on the steps to his tower, waiting for an individual audience, each honoring him by kissing the ring on his extended hand.
.
“Doesn’t that look just like a scene from The Godfather,” Liz whispered.
“It does indeed,” I agreed.
.
Wiser women might have jumped ship, but we had no wish to swim with the fishes. And besides, I couldn’t swim. So instead, I chose to acquiesce by placing my brand new Canon SureShot on a table with all the other cameras voluntarily surrendered, and drank up.

———– TO CONTINUE READING ————
THE ABOVE ESSAY REPRESENTS AN EXCERPT FROM:
Seriously, Mom, you didn’t Know?
by Marguerite Quantaine © Copyright © 2019
NOW ON AMAZON & AVAILABLE IN BOOKSTORES NATIONWIDE
You are urged to LOOK INSIDE on Amazon for a try-before-you-buy FREE READ of the first 3 chapters.

Marguerite Quantaine is an essayist and author.
Her book, Imogene’s Eloise : Inspired by a true-love story
is available AMAZON, in paperback , and on Kindle.
.
WHAT’S YOUR ANCESTOR STORY?
Please add your thoughts here by selecting REPLY.
I’m all eyes and heart.
.

2 thoughts on “ONLY THE NAMES HAVE BEEN CHANGED”