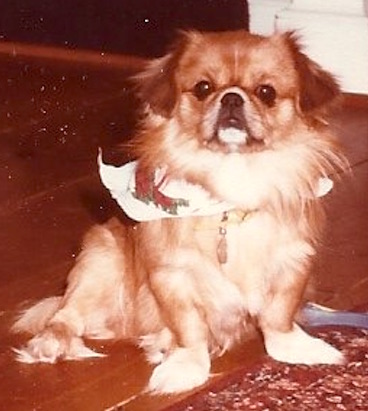 Every year at this time I use a luminescent-ink marker to highlight the kitchen calendar in memory of a miniature, copper-tinged Pekingese that was thrust into the arms of my partner one gusting, sleety night by a battered woman we barely knew who hastened backward, shrieking that her husband had beaten her and now vowed to kill her dog.

Liz buttoned the trembling puppy inside her coat to ward off quitclaim and cold, later presenting him to me as having “followed” her home.

“Uh-huh. He just tagged along after you,” I supposed before learning the dire details.

“How utterly desperate that woman was,” Liz sighed.

“Dear little earth-angel,” I whispered and kissed as tears welled up in my eyes. “From now on, you’ll be our Tagalong.”

We shared a fast affinity, Tag and I. Liz could feed, bathe and walk him – but most of his time was spent moored to me.

Besides being irresistible, three particulars made Tag precious. First, he’d been born on Liz’s birthday, ensuring endearment. Second, he adored me. Enough said. Third, he could talk.

Yes. Talk. And, I could understand him. Perfectly.

Whatever he said came into my head. And whatever entered my head came out of my mouth as what he wanted known, done, or felt. A kind of oratory by osmosis.

The talk was just between the two of us at first, but eventually we let Liz in on it. Then my mom. Then my sisters, and so forth. As word spread, we gained a following, albeit essentially esoteric. Family, friends and neighbors were ever eager to hear Tag talk. Most were mesmerized. A few were dubious. But only skeptics dismissed us as a slick trick.

Initially, even Liz vacillated, since I never struggled to decipher the dog’s din. The warble of his words would emerge clear from my mouth, almost simultaneously.

Then one wee hour of a mid-March morning as the wind whipped at the windows and thunder menaced, Tag began to whine, chant, and drone, mouth waggling, head bobbing, paws pawing.

“He says the upstairs porch is leaking. Rain’s coming in through the sunroom ceiling.”

So, Liz donned a robe and snarled her way down the stairs, words burning blue behind her. Defiantly, she flung open the French doors to the sunroom where – sure enough – water showered the floor.

...and more
THE ABOVE EXCERPT IS FROM:
Seriously, Mom, you didn’t know?
by Marguerite Quantaine © Copyright 2019

THIS LINK OPENS TO A FREE 3+ CHAPTER PREVIEW
(If it skips ahead, just tap the left arrow.)

I’m all heart and eyes.

53 thoughts on “IF YOU EVER LOVED A DOG”